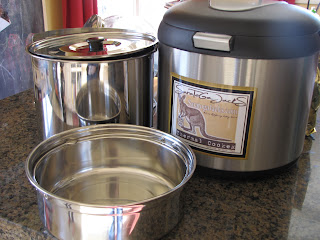 I love Honeyville Grain!!  I have mentioned them quite a few times here on the blog, but they really are a great resource for food storage and emergency preparedness.  They have started carrying a new product in their retail stores called The Saratoga Jacks Thermal Cooker. I have found a new favorite gadget!!

The whole idea behind a thermal cooker is the heat from a short, rapid boil will keep your food cooking in an insulated cooker for up to 8 hours. Think of a cordless Crock Pot!  The Pioneers that crossed the plains in the 1800's used the same concept called a hay box.  They would cook their soups or stews in the morning, place the pot in a box surrounded by hay and the food would slow cook all day long while they walked.

The modern day idea for the hay box is called a Wonder Box and is used by food storage enthusiasts all over the world.  The Wonder Box is also a life saving cooker for women in third world countries. 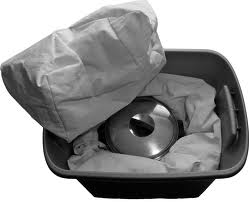 They are relatively easy to make and only around $30 to put together.  If you would like instructions click HERE to view them.  I have wanted to make one for quite a while now but now that I have a Saratoga Jacks cooker I may not need one.  The only reason I would probably make one is there isn't a size restriction on the pan you put in it.  With the Saratoga Jacks you are limited to their pan size for cooking.  You can cook bread in a Wonder Box using 42oz juice cans but that size juice can barely fit in the Saratoga Jack, but that is the only downside to the Saratoga Jack that I have found. The selling point for me was that I can conserve my fuel in an emergency by only having to bring my food to a boil for a few minutes, and letting the cooker do all the work without electricity.

I made dinner for my family in my Saratoga Jack the other night and it turned out really good!! 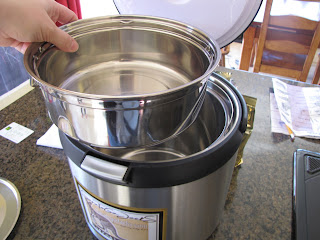 The thermal cooker comes with a large pan with a smaller insert that sits right on top to cook things like rice or veggies.  I made a recipe off of the Saratoga Jacks website called Mexican Chicken Delight with Rice. 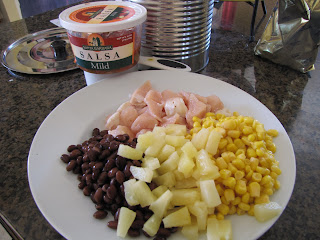 This recipe couldn't be any easier.  In the large stock pot that came with the cooker add chicken, cover with 1" of water, then add the black beans, corn, pineapple and a large container of salsa.  Place the pan on a heat source, bring to a rapid boil with the lid on for 4 mintues, then place in the SJ base and close the lid.  When cooking with a thermal cooker you need to bring your food to a hard rolling boil for 4 minutes for raw meat and only 2 minutes for non-meat dishes.  I made rice in the smaller pan and it only needed a 2 minute boil before being stacked onto the larger pan.  Once the lid is closed, don't peek, it will let all the heat escape. It almost feels like magic because the food will cook and the heat will be retained for up to 8 hours!! Nothing will burn or overcook.  Meats will be fall-off-the-bone tender and rice cooks up moist and fluffy. 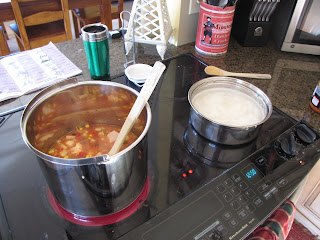 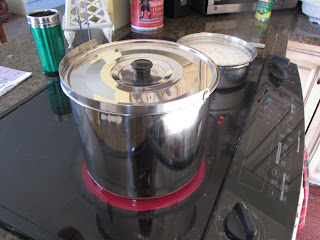 Remember the lid must go on the pot as it is boiling so it will heat up too.  You want as much heat as possible to be in the thermal cooker when you close the lid.  Adding a cold lid to the pot would cool down your food and it wouldn't cook properly. 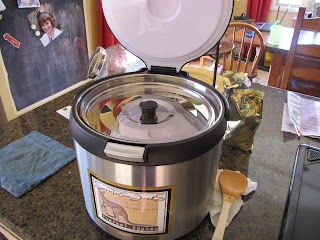 Here are the pots stacked with the lid on and then I closed the top of the Saratoga Jacks and let it sit for about 6 hours. 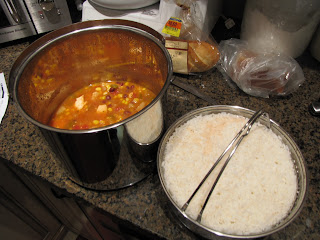 Dinner was hot, cooked through, and ready to eat when we were.  Click HERE for the complete recipe.  I have fallen in love with this gadget!!  I can't wait to try out other recipes.  I made bread in it yesterday, but that is for another post :)

If you want more information check out their website at saratogajacks.com and also the Honeyville Grain store in Salt Lake City can help you with any questions you may have.

"Have Faith, Unencomber Your Life, Lay Up In Store" -Keith B. McMullen
Pin It
Posted by Julene at 10:20 AM 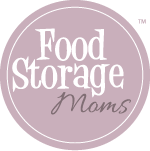 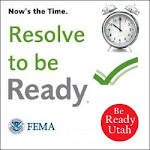